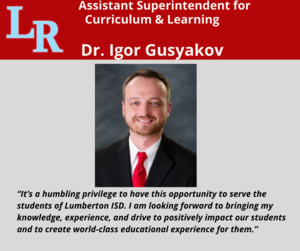 Dr. Igor Gusyakov comes to Lumberton ISD from Nacogdoches High School, where he has served as Assistant Principal for Curriculum and Instruction for the past four years.

Gusyakov began his teaching career in 2002 in Khmelnitsky, Ukraine as an ESL (English as a Second Language) teacher at a private school, while still attending college full-time. In 2003, as a result of a rigorous selection process through IREX (International Research and Exchanges Board) and the US Department of State, Gusyakov received a full scholarship and came to the United States to attend Stephen F. Austin State University (SFASU) as part of a one-year exchange program. Upon his return to his native country Ukraine, he founded a private language school. In addition to all the administrative responsibilities that came with running a school, he continued teaching English and Spanish as a second language. In order to bring some American culture to Ukraine, as part of his language school, in collaboration with the US Peace Corps, he organized annual summer baseball camps for Ukrainian youth. The US Peace Corps volunteers were invited to the camp as coaches, which provided his students with the opportunity to practice their English skills, foster intercultural exchange, and to simply have a great time.

In 2010, in an effort to continue his education, Gusyakov came back to Nacogdoches and SFASU to work on his Master’s Degree in Early Childhood Education. Upon receiving his Master’s degree, he was invited to teach Spanish at Nacogdoches High School (NHS) as a long-term substitute teacher. He ended up getting the TEA certification in Spanish within the first two months of teaching and continued teaching Spanish at NHS for the following 5 years. In 2016, his initiative and continuous strive for growth, helped him in his promotion to a position of a grade-level assistant principal at NHS. Given his education and experience, the following year he was promoted to the academic side of school administration to become an Assistant Principal for Curriculum and Instruction. In 2017, Gusyakov earned his Doctoral degree in Educational Leadership from SFASU. He also speaks four languages: Ukrainian, Russian, Spanish, and English.

An exciting addition to Gusyakov’s professional growth has been the certification process for a curriculum auditor with Curriculum Management Solutions, Inc. Earlier this year, he successfully completed the third (last) level of training. The certification process has allowed him to look at maximizing student achievement by aligning curriculum, assessments, and lesson delivery, as well as by looking at alignment of policies, organizational structure, budget, and facilities.